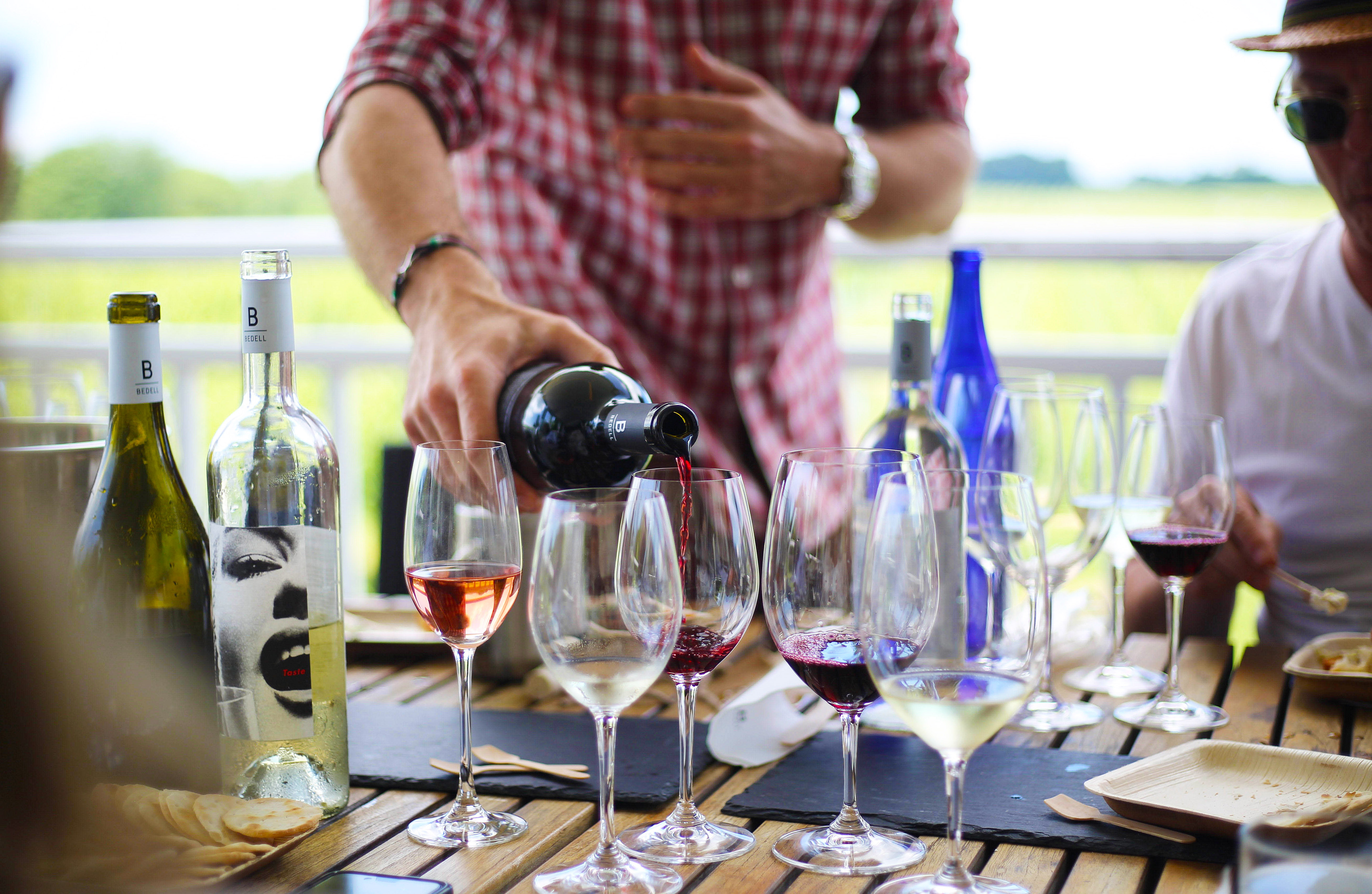 There’s a lovely little Napa Valley equivalent only 90 minutes from Manhattan on the North Fork of Long Island. And the best winery among the 40 or so that you can choose to visit? For our money, it’s the highly-acclaimed Bedell Cellars.

Don’t just take our word for it: their 2009 Merlot was served at the Inauguration of President Obama in 2013.

Our intrepid Dandelion Chandelier Style Council took a field trip to the North Fork last week that was a revelation and a delight. It was my first visit to the “Brooklyn of Long Island,” and among our adventures was a visit to the premier winery on the East End, Bedell Cellars.

Confession: it was also my first trip to a winery. We went to Napa Valley once years ago, and it poured buckets of rain from the moment we arrived to about an hour before we departed. So no vineyard-hopping that trip (although the wine list at our luxury hotel was really very good, as was the spa). We’ve consumed our share of reasonably good wine, and we’ve been on plenty of factory floor walks for products ranging from bleach to T-shirts, but we’d never found the leisure time to see how fine wine is created at the source.

On arrival at Bedell Cellars, we immediately stepped into a stylish and dreamy landscape. There’s a sleek tasting room housed in a charming cream-colored clapboard former barn surrounded by blue hydrangeas. A weathered red pick-up truck sits at the far end of the property – it turns out to be the one driven by the founder of the winery as he planted the first vines.

Kip and Susan Bedell were the original owners and vintners here; they planted their first grapevines on the property in 1980. Kip later earned the nickname “Mr. Merlot” from Wine Spectator magazine. In 2000, the property changed hands and an extensive renovation resulted in the lovely grounds that exist today. The Vineyard Manager who worked for the Bedells, Dave Thompson, pioneered many sustainable techniques that are now standard practice – he’s still at the winery, and his modern approach to the environment anchors the entire operation.

Inside, the production facility is spotlessly clean and gorgeous: there are pyramids of French oak wine barrels tastefully stained in a band of deep crimson at their waistlines – that’s where red wine is wont to spill, and this keeps them uniformly chic. The walls are decorated with dried and preserved grape vines that look like contemporary works of art. There’s also a wall installation demonstrating the nature of the terroir of the North Fork – it’s described as “maritime” by the local vintners.

At Bedell Cellars, the grapes are fermented with indigenous yeast from the North Fork in stylish stainless steel vats: their unusual legs caught the eye of the design expert in our group. No detail has been left to chance here. The vats are custom-made, and of various sizes –they map to specific plots in the vineyard so that every varietal gets its optimally-sized vat. The viewing window of each one is precisely the height needed for the CEO to inspect what’s happening inside. We’re control freaks ourselves, and we were deeply impressed by that.

Out in the vineyard, we inspected a row of chardonnay grapes just at the first stages of growth: little pollen-covered green shoots are the only evidence that someday there’ll be a bunch grapes on this vine. When the time comes, they’ll be hand-harvested.

It’s been said many times but bears repeating: we don’t know enough about where our food and drink comes from, and about the hands that tend the ingredients as they grow. It’s incredibly special to hear the story of the vintner, see the vines, and then taste the wine. It undoubtedly tastes better as a result of the appreciation one has for the work that went into it.

The property has an expansive elevated covered terrace suitable for weddings or other large gatherings, with a stunning view of the vineyards below. There’s a rose-and wisteria-covered trellis framing the walkway to the owner’s cottage, which is filled with contemporary art. Wedding ceremonies can be conducted under an ancient oak tree on the lawn behind the cottage.

So who’s responsible for this perfectly curated luxury experience? The winery’s owner since 2000, Michael Lynne – film industry titan, producer of The Lord of the Rings Trilogy, Austin Powers, and Sex and the City, CEO of New Line Cinema, and notable contemporary art collector and Trustee of the MOMA.

And the winery’s CEO since 2002, Trent Preszler.

We’ve already shared our adventures visiting the headquarters of the Preszler Woodshop, where Trent creates magnificent hand-crafted canoes that retail for $100,000 each. But that’s just his side hustle.

His day job is running Bedell Cellars, and it’s his design vision, in close collaboration with Lynne, that resulted in this magical place. He shows us photos of what the property looked like the day he started work: a dilapidated barn, muddy fields, and not much else other than that iconic red pick-up truck. It’s a testament to the brilliant partnership formed between owner and CEO that it’s nearly impossible to believe how far the property has come in the past decade.

Lynne’s taste and influence in the art world is felt in all corners of the operation: contemporary sculptures can be found throughout the grounds. One is a shark crafted to mirror Damian Hirst’s famous 1991 work The Physical Impossibility of Death in the Mind of Someone Living; another is an oversized metal sculpture of a paper airplane.

The connection between the art world and the winery also shows up on the labels of many of its offerings: contemporary artists Barbara Kruger, Chuck Close, Ross Bleckner, Mickalene Thomas and April Gornik have all created custom artwork inspired by the various blended wines (the single varietals bear a crisp clean label designed by Trent). The names of the blended wines are a further homage to the art-world: the premier red and white offerings are named Musée and Gallery.

But enough of the scene-setting! Is the wine any good?

Richard Olsen-Harbich is Bedell’s head winemaker, a legend in his field with over 30 years of experience. Not that you need us to tell you, but the man definitely knows what he’s doing.

When we arrived we were served glasses of Sparkling Rose 2016. It was refreshing and scrumptious, but at that point we were so giddy just to be there that I discounted how I felt about the wine itself. I think anything would have tasted like ambrosia at that point.

The true taste test occurred after we’d settled in and toured the property and the vineyard. We were led to a wooden table on the breezy terrace and treated to a tasting of two whites and two reds, accompanied by North Fork Honey (made on the property); goat cheese from the neighboring Catapano Dairy Farm, and assorted dried fruit, bread and crackers.

The wines we sampled were all delicious, but two of them really stood out for me. We started with Taste White. It was good, but the hero – at least for me – was the Gallery 2014, a blend of chardonnay, viognier and sauvignon blanc. It’s the winery’s premier white, made only when the grapes are right, and it’s splendid.

For the reds, we sampled a Cabernet Franc, followed by the famous Musée, the premier red from the winery. It’s incredible, and somewhat hard to find (I personally left with the last 2 bottles they had in stock at the time, and don’t bother asking, they’re not for sale).

We left the vineyard feeling as if we’d just had a short trip to France, or Italy. What an elegant way to spend a couple of hours! But if the idea of a wine tasting in a refined setting strikes you as off-putting or intimidating, no worries. The winery also owns Corey Creek Vineyards in in Southold, and the tasting room there is extremely relaxed. The wine is on tap so you can taste direct from the cellar, and the vibe is deeply chill. And the tap handles? They’re designed and hand-carved by Trent.

If you can’t visit in person, you can purchase directly from Bedell if you live in one of the 38 states where they can direct ship. You’ll also find their wines in many of the boutique hotels and hot restaurants on the Atlantic coast, including Nick & Toni’s in the Hamptons; Upland, Nobu, Eleven Madison Park and The Modern in Manhattan; and the 1 Hotel Brooklyn Bridge and the Wythe Hotel. The Parrish Art Museum, the MFA in Boston and the Barclay’s Center also stock the brand regularly.

If you visit Bedell Cellars during the winter months, you can hang out in the cozy aerie upstairs from the main tasting room in front of the fireplace. It’s fully booked for weddings this summer, but it would be a perfect setting for a summer or autumn wedding (one nice element of the North Fork is that it stays balmy right through November).

So whenever you decide to embark upon your excursion to the Great North, make this one of your stops. You’ll take home some sweet memories, great stories, and some really nice wine. And if you see Trent, tell him we said hello.

0 comments on “The Best Winery on the North Fork: Bedell Cellars”