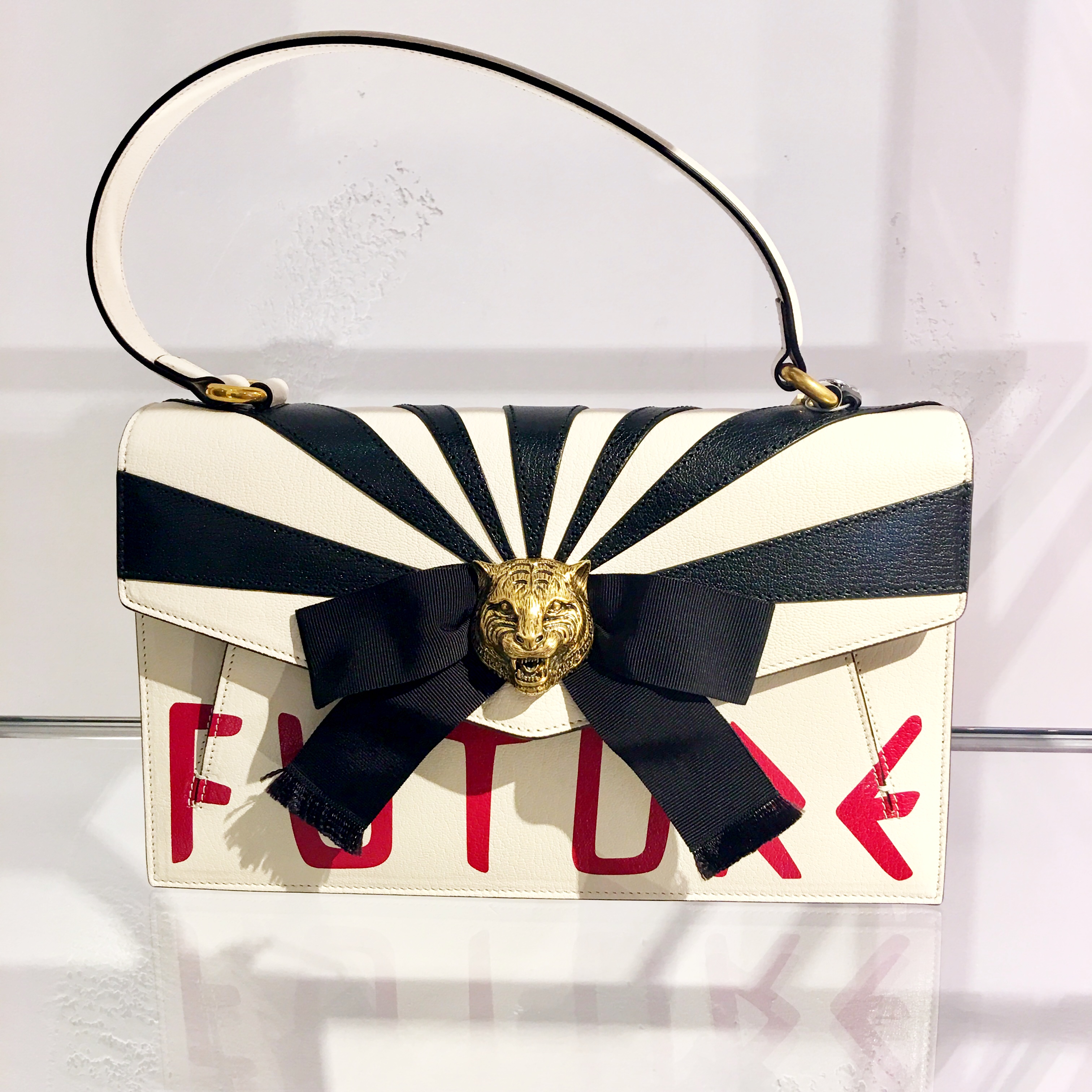 You may think that Amazon is taking over the universe, but keep your eye on Gucci. Its influence on global culture and commerce is omnipresent, enormous and growing, and you may not even realize how it’s changing the way you see the world. My money is on them in the race for total global domination.

It’s also the only force that I see in the world right now with a real shot at uniting the people of Earth across the boundaries of race, color, class, religion and creed. Yes, you heard that right. Not the UN, not the darling duo of Justin Trudeau and Emanuel Macron. Gucci. Mark my words.

Why? My hypothesis is driven by a series of simple observations.

Those of you who – like me – still actually shop at retail will have already noticed this: Gucci is the only store in the mall or on the great shopping streets of the world that attracts everyone. Black people. White people. Hispanics. Crazy-wealthy people. People of limited means. Upper East Side. Oakland. Rappers. Folk singers. Young men. Older women. LGBTQ, straight, Christian, atheist, Buddhist, capitalist, Communist.

I checked into a posh hotel a week ago, and the European family – mom, dad, boy, girl, were all sporting Gucci – as was the bellman who took their bags at the front desk. No one seemed to mind, or even notice, that everyone was wearing the same brand. In this divided world, that’s serious cultural influence. That’s a serious sign of hope, actually.

Say what you will, you Thorstein Veblen types: conspicuous consumption may be a global malady, but given the alternative, I’m just happy that there’s something we can all agree on.

Since Alessandro Michele’s takeover of Gucci in 2015, under the stewardship of corporate owner Kering and CEO Francois-Henri Pinault, the brand has been on fire in a way that would have been unimaginable just a few years before his arrival. The sex-pot Tom Ford era ended in tears, and the brand became nearly irrelevant in the years following his departure.

But lo and behold, Gucci has not only recovered – it’s exceeded its influence during the 1990s, crafting an inclusive, happy, kooky and highly influential aesthetic that is bleeding over into many disparate elements of the fashion world and beyond.

It’s not even newsworthy that on the current cover of fashion magazine Marie Claire, Chrissy Teigen sports a Gucci dress that features a patchwork of every color of the rainbow, plus paisley, butterflies, pearls, sequins, and ribbons (she looks great, by the way).

What’s newsworthy is the way in which the brand has expanded its influence to encompass a vast array of projects beyond its runway shows. Just a sampling: the house has asked social media artists to write memes around its new product launches, selected reasonably obscure rock artists as its runway models, and even commissioned graffiti.

This is all on top of what was already happening organically on the street with the brand name: the graffiti artist “Gucci Ghost” started making his mark and was ultimately asked to create a limited-edition capsule collection for the brand last fall. The hip-hop world is in love with the brand: hot rapper Gucci Mane co-opted it for his moniker.

So what makes this brand so universally appealing? I see at least 6 reasons.

–It’s fun. The flagship Gucci stores and the Gucci women’s boutique at Bergdorf’s look like the wardrobe closet of your batty aunt who loves head wraps, bright colors, sparkle and shine. It’s a bit overwhelming, but it’s nearly impossible to feel bad after spending a moment or two just taking it all in. It’s kooky good fun and it makes you want to surrender all of your uptight, grown-up constraints. If you ever loved playing dress-up with your mom’s clothes and jewelry, you’ll recognize the feeling instantly: layering bright fun colors and boatloads of shiny jewelry, wearing funny slippers and glittery shoes – what’s not to like?

–It’s harmless. The brand has certain iconic elements, animals among them. However, the through-line is absolutely innocent. Gucci’s ferocious menagerie is like a child’s view of what scary looks like: feisty cats abound. Also bees (eek), raccoons and snakes. It’s naughty, not subversive: graffiti artist “Gucci ghost” scribbles in vibrant neon colors on leather goods and sweaters, but it’s not about politics, or freedom, or equality – it’s about the joy of leaving a mark on something. What mark you leave is up to you – in the world of Gucci, nothing is offensive, it’s all just good fun. And sex? It doesn’t really enter the picture.

–It’s completely inclusive. Gucci was the first to combine its men’s and women’s runway shows, doing away with traditional gender distinctions. Its runway models and those featured in its ads are frequently of color, and usually outside the norm of what used to define “beautiful.” The brand is about being interesting, quirky, and individual – which is a lot more compelling to most people than the rigid formulaic approach to beauty that most luxury brands still employ.

–It’s daring and self-effacing. The brand will go places that luxury brands have traditionally feared to go. Take the recent release of eleven T-shirts designed by whimsical graphic artist Angelica Hicks. The shirts poke fun at Gucci icons and the brand’s celebrity fans. How many luxury brands can you name that are actually willing to make fun of themselves?

–It celebrates art at a time when artists are increasingly under fire. The fashion house debuted a huge art mural in New York’s SoHo this spring as a part of their new partnership with Colossal Media (a company that specializes in outdoor ads and murals). In a press release, Gucci announced that the wall will serve as a way to highlight the “beauty and uniqueness of the almost forgotten art form of hand painted outdoor advertising.” Creative types understand the pressure that large corporations can face when they support the arts – and that loyalty runs in both directions.

–Lastly, while it bends the rules of fashion, it doesn’t break them. Stay with the example of the Hicks T-shirts: the brand made only 100 of each version, at $490 each. Every T-shirt in the collection is numbered with a dedicated label, and is packaged in a metal container with the artist’s work on the outside. So basically, a simple T-shirt becomes a collector’s item that will bestow both bragging rights and resale value on its owner. Scarcity is a basic law of luxury, and Gucci has it down cold. Another key element? A refined service experience. At its own stores, the retail experience is impeccable. My favorite sales associate at the Gucci Fifth Avenue flagship in Manhattan is Janik Aleksander: he’s knowledgeable, discreet, elegant and encouraging — he embodies what a luxury retail experience should be all about. Attracting and retaining that kind of talent is key to any brand’s success. The discipline Gucci has been exhibiting in these traditional elements of luxury has bestowed impressively wide latitude on pricing. How many brands can successfully sell $3,300 cotton hoodies and $600 fur-lined mules? The Cruise 2018 Collection features $1,250 dirty white sneakers. I’ll bet they’ll sell out.

The company’s approach to the marketplace has also earned Gucci the resilience to recover from the occasional PR misstep in a way that should be envied by the likes of United Airlines and Uber. Case in point? A particular piece from Gucci’s Cruise 2018 collection, which celebrates the iconic style of hip-hop fashion culture from the 80s, recently caused an uproar. The line featured a logo-printed puff-sleeved fur jacket that many thought bore a strong resemblance to a vintage design created by revered hip-hop designer Dapper Dan. This unleashed a storm of controversy and reprimands from fans far and wide. Gucci quickly issued an apology. Other brands would have experienced a hit – even if temporary – to their image and sales. But touchingly, the Gucci kerfuffle did not spoil the romance for most of its devoted fans – one scribe concluded a critical Internet post by writing “Not hating on @Gucci, love the brand, but stay real.” All is forgiven, dear Gucci. Just don’t break our hearts ever again.

That’s the power of a strong brand. It will carry you over some rough spots that would fell a weaker brand name.

One quick way to capitalize on this global phenomenon? Make Gucci a core part of your social media presence. Anything we post on our Dandelion Chandelier Pinterest and Instagram accounts – and I mean anything – that involves a Gucci product always attracts the greatest number of likes. I frequently think about just changing our social media strategy to all-Gucci all the time until we hit like 100,000 followers. I feel sure that it would work.

Is this the tipping point? When everyone in the world loves something, does that mean it’s time to short the stock? Or, like some other hot names, will Gucci continue to blaze on for years? Your guess is as good as mine. I’d say it comes down to the fertile creative brain of Mr. Michele and his team to stay ahead of the curve. Is he the Steve Jobs of the fashion world? Time will tell.

In the meantime, I just bought a gorgeous Gucci bag, and I have my eye on a sensational coat from pre-fall. Our advice? Get yours before they’re gone.