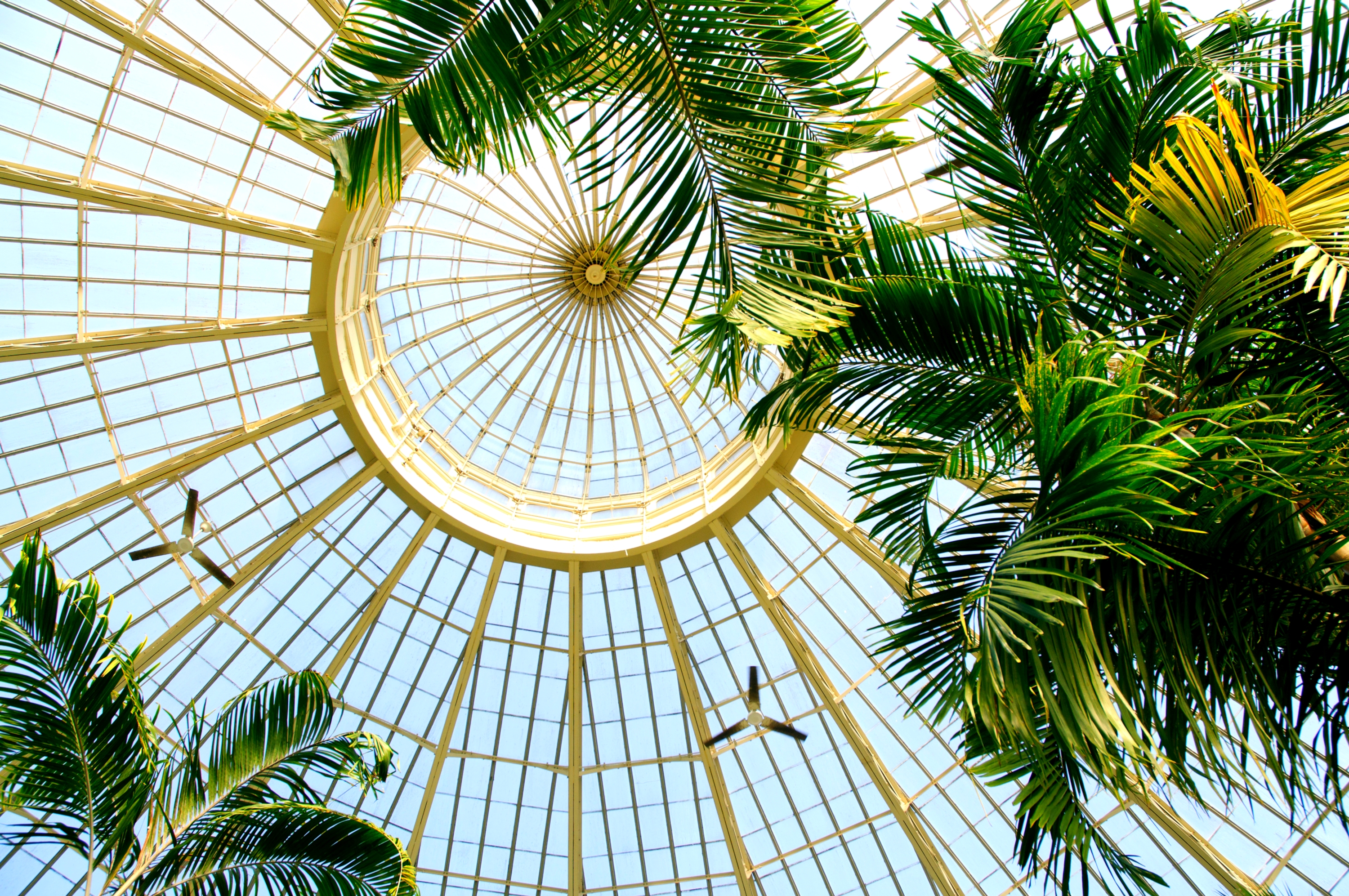 It’s commonly assumed that while some cultures embrace formal gardens and gardening as a core part of their identity, Americans are not among them. For the record, while horticulturalists are somewhat rare in these parts, the situation is not entirely hopeless. Our friends at Statista report that in 2016, of Americans with a household income of $200,000+, 13.8% said that they attended a garden or flower show at least once within the past twelve months, and almost a third spend $10,000 or more every year on their own gardens.

So for those with green thumbs, or those who love them, here’s the final installment of our three-part Dandelion Chandelier list of the not-to-be-missed gardens of the world, with the focus on the Americas. And to answer the question: yes, some of these are as spectacular as any you’ll find on earth.

In New York City, we highly recommend the New York Botanical Garden in the Bronx; this spring, glass artist Dale Chihuly returns after a 10-year hiatus with a site-specific installation. The Brooklyn Botanic Garden is more intimate but equally serene; and hidden away in the Riverdale section of the Bronx is the stunning Wave Hill, offering an expansive green lawn with panoramic views of the Hudson River.

There are numerous areas of Central Park that are iconic and not to be missed, including the classic and elegant Conservatory Garden at the north end of the park (site of the famous “hat lunch”).  And the High Line is one of the most unusual urban gardens in the world.

Many of Manhattan’s great museums also have lovely gardens, some so secret that you’re likely to be able to experience them in solitude (or at least without the cacophony of a crowd): we vote for the Chinese Garden Court at the Metropolitan Museum of Art and the Sculpture Garden at the MOMA. On the Upper East Side, the Frick and the Cooper Hewitt also have intimate and charming gardens that are lovely places to take in spring in the city.

In the suburbs of New York City, the Storm King Art Center is a sculpture garden of epic proportions that is absolutely worth the trip to see. And Kykuit, the six-story hilltop estate that was home to four generations of the Rockefeller family, features expansive terraced gardens containing an extensive collection of 20th-century sculpture from artists including Picasso, Calder, Henry Moore, and Louise Nevelson.

Boston is home to two exceptional gardens right in the city: the Public Garden and the interior courtyard garden at the Isabella Stewart Gardner Museum. If you want to venture further afield, Harvard’s Arnold Arboretum is lovely (Lilac Sunday will be celebrated on Mother’s Day). Across the river in Cambridge, the Ware Collection of Models of Plants at Harvard’s Peabody Museum, aka The Glass Flowers, were recently refurbished and are really beautiful. If you go, stop by Mount Auburn Cemetery, too, which in addition to serving as a burial ground is also quite a lovely garden. Elsewhere in Massachusetts, The Mount, Edith Wharton’s home in the Berkshires in Lenox, is home to a sunken Italian garden, a French flower garden and a rock garden – combined with a tour of her house, a visit here is a wonderful way to better understand the life of this chronicler of the Gilded Age.

The next time you’re in Washington, DC, make time for a stop at Dumbarton Oaks in Georgetown. Now owned by Harvard, the garden was created by two powerful women – Mildred Bliss and Beatrix Farrand. It’s quirky and creative, as the property is very steeply graded. There’s also an extension designed by Philip Johnson that’s like nothing you’ve ever seen before.

My hometown, Detroit, is the site of the lovely Belle Isle Park; the 987-acre island features the oldest continually-running conservatory in the United States. Opened in 1904, it’s now named for Anna Scripps Whitcomb, who left her collection of 600 orchids to the city in 1955. The architect and garden designer modeled the greenhouse and the surrounding gardens to resemble The Crystal Palace and the Palm House at Kew Gardens in London. Elsewhere on the island, there are three lakes to stroll around, and spectacular views of the Detroit skyline.

On the West Coast, the Palace of Fine Arts in the Marina District of San Francisco is one of our favorite spots; while not technically a garden, it’s a lovely and haunting space that will make you feel that you’re very far away from the city.

While in Los Angeles, make time for a visit to the garden at the hillside Getty Museum; its architectural details will remind you of Rome. The Hotel Bel-Air and The Beverly Hills Hotel both have gorgeous gardens on their properties that are hushed, private and full of blooms.

Hawaii has so many gorgeous gardens that it’s impossible to name-check them all. Our personal favorites are on Maui: driving the Road to Hana is itself like touring a continuous garden, but stop in to see the 294-acre botanical Kahanu Garden and the aptly-named Maui Garden of Eden, set on 26 acres of trails, picnic spots, waterfalls and coastal views. The National Tropical Botanical Garden in Kauai is really special; on the Big Island, our friends recommend the Hawaii Tropical Botanical Garden.

Les Quatre Vents in Quebec is an iconic example of 20th-century European garden style, and one of the most beloved in the country. Created and owned by Frank Cabot, an American whose family bought the land in 1902, the property covers 20 acres and is made up of 24 smaller gardens. Many of the plants are native species, and the layout is full of beauty, whimsy and surprise (a quartet of frogs plays Dixieland music in one hidden corner).

The Butchart Gardens in Victoria, British Columbia are also the work of one passionate gardener. At the turn of the last century, Jenny Butchart set about beautifying the pits her husband’s limestone mining company had left on their Vancouver Island property. Still owned by the family, most of the 55-acre property is open to the public, including Butchart’s first creation, the Sunken Garden, as well as those that followed – the Japanese Garden, the Italian Garden and the impressive 300-species rose garden. On summer Saturday evenings, there are fireworks set to the music of show tunes.

Las Pozas is an exotic garden built by Englishman Edward James in the 1950s; set on a 100-acre hillside where the Sierra Madres meet the coastal plains of the northeast state of San Luis Potosi, it took him 20 years to complete, and it’s perpetually at risk for being overrun by the jungle in which it resides. James was reasonably eccentric, and a patron of surrealists including Dali, Magritte, Leonora Carrington and Remedios Varo. His garden reflects this: sprawling over 80 acres, it features fantastical buildings, suspended walkways, a series of waterfalls and pools (“Las Pozas” means “The Pools”) and surreal sculptures emerging from the undergrowth.

If you love orchids, Costa Rica is a must-visit, as it has the richest variety in Central America, with more than 1,400 identified species. Special gardens to see include the private Else Kientzler Botanical Garden at the foot of the Poás Volcano, home to over 2,000 different varieties of flowers. The La Paz Waterfall Gardens house the world’s largest butterfly garden, and also a lovely hummingbird garden. The Monteverde Cloud Reserve supports a complex and extensive eco-system with over 100 species of mammals, 400 species of birds, tens of thousands of insect species, and over 2,500 varieties of plants (you’re also likely to spot jaguar, ocelot, Baird’s tapir and rare tropical birds).

The superstar of horticulture in Brazil is Roberto Burle Marx. Credited with having introduced modernist landscape architecture to the country, as well as having discovered 20 new plant species, Burle Marx employed native plants to create living works of conceptual art.

He designed public spaces, like the Copacabana Promenade. But most of his noteworthy work can be found in places like the Strunk Garden (in a private home) which includes a wonderful checkerboard-patterned lawn. The Fazenda Marambaia (formerly known as the Monteiro Garden) is in a spectacular valley with the Serra dos Órgãos Mountains as a backdrop; its focal point is a small lake, one side of which is planted with dramatic blocks of foliage. The artists’ home, Sitio Santo Antonio da Bica, is located on the outskirts of Rio. It boasts a stunning collection, including paintings, sculptures, and glass art, as well as more than 3,500 plants in the gardens. If you want to pay further homage, stay at The Palacio Tangara, a new hotel next to Burle Marx Park in Sao Paulo.

Elsewhere in Brazil, another stunning green space is the Pantanal, the world’s largest continuous wetland area, most of which lies within the state of Mato Grosso do Sul. The Caiman Eco Lodge is the perfect place to see the indigenous flora and fauna (the bird-watching is phenomenal).

Having (virtually) traversed the world in our exploration of the most beautiful gardens we could ever hope to see, it seems fitting to end the journey singing (or at least humming under our breath). As the immortal Joni Mitchell wrote in her iconic song, “Woodstock,” famously performed by Crosby, Stills, Nash and Young: We are stardust, we are golden . . . and we got to get ourselves back to the garden.

We’ll see you there.

0 comments on “Where are the Most Beautiful Gardens in the Americas?”