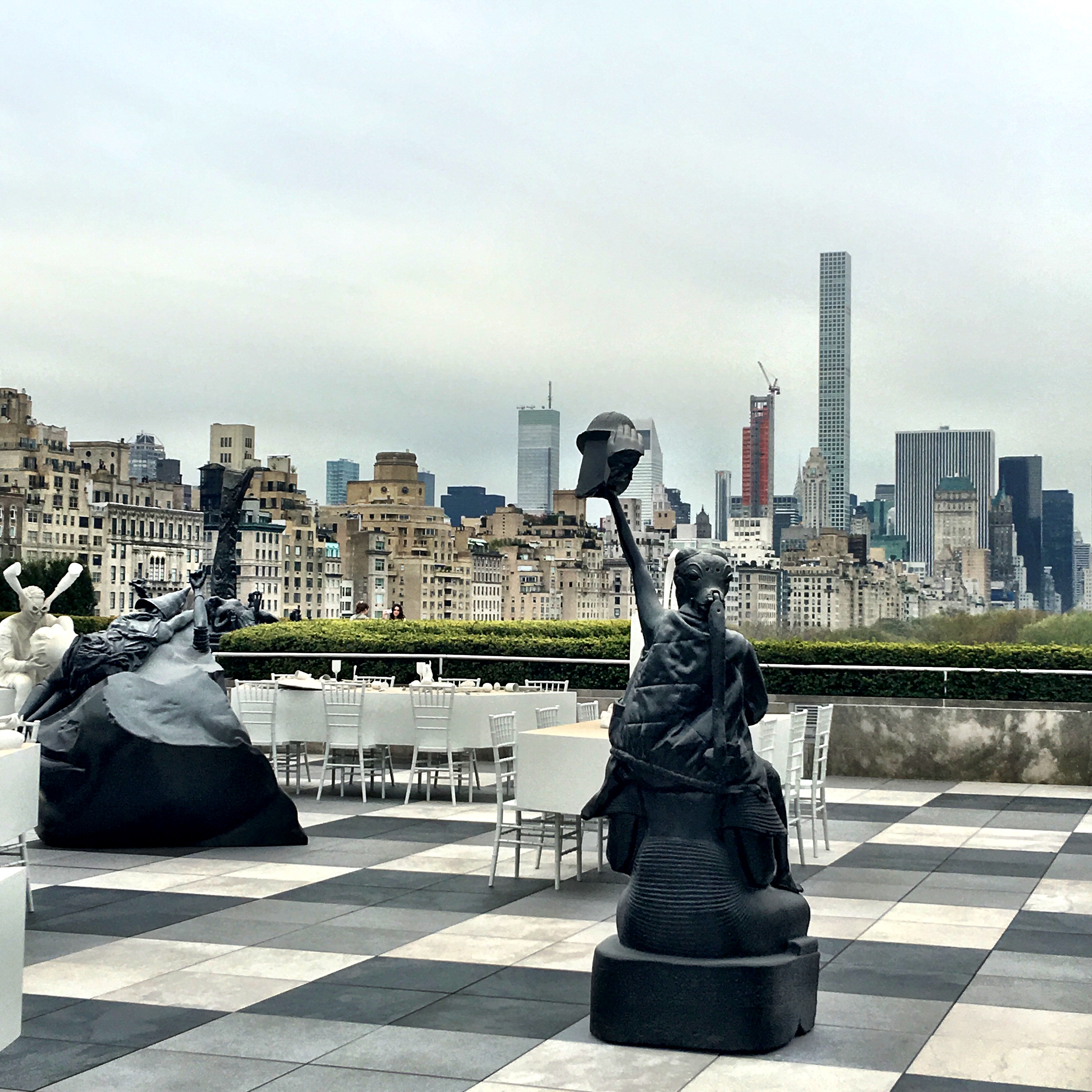 There are strange doings up on the roof at the Met right now. You’ve been warned.

Brace yourself for an otherworldly experience if you venture to the outdoor garden at the top of the Metropolitan Museum this spring. An annual visit there is a treasured warm-weather ritual for us, and for many, but don’t go this year expecting fairy-tale whimsy. Against the Manhattan skyline, instead of a replica of the home featured in the classic movie Psycho, or a cloud city, you’ll find something truly wondrous strange.

The Argentinian artist Adrian Villar Rojas has created The Theater of Disappearance, a site-specific installation. The museum’s guide to the installation reports that Rojas took as his inspiration the Met itself, using specific objects in its collection, its history of collecting art, and conversations with its staff to form a “performative diorama” that is both enchanting and disturbing. Think Alice in Wonderland meets Game of Thrones.

The installation is a series of 16 sculptures, half stark snow white and half deep charcoal grey; proper viewing requires circling them several times, as the stories they tell are revealed in three dimensions, and repeat viewing will be rewarded.

The grey ones are all vertical. One is a solitary somber hooded male figure clad in several layers of outerwear (some ancient and some modern), wearing heavy boots and clutching a small female statue in his ungloved hands. Two diminutive simian figures, one seemingly wracked by despair, are perched on either shoulder. The man carries an enormous backpack, which is embellished with the head of a classical Greek sculpture – bearing a worried expression and rubbing its temples. Are they on a pilgrimage? In a funeral procession? Undergoing a forced march? Hard to say.

Another is a young boy with a rapier, wrestling with two snakes and a crocodile while being closely observed by a dispassionate stork. The outcome of this contest is definitely in question. The sculpture rests on a pedestal with an older male face that might represent the boy’s father. Is this the sins of the father being visited on the son? Possibly. Discuss amongst yourselves.

A third displays two lovers locked in a kiss. Both are wearing extreme headgear: one chapeau has the ears, menacing face, and sharp bared teeth of a donkey; the other lid quite closely resembles the habit of the Flying Nun. From certain angles, it appears that in both cases their hats are devouring them whole. They’re sitting on a contraption that appears to be ribbed industrial rubber tubing encircling a garbage can. They seem completely oblivious to a child right next to them drinking something from a classical Greek or Roman urn. Is this the triumph of love in a dark world? A commentary on the selfishness of lovers (what is that child drinking, and is it harmful? Why aren’t they watching him?) Is it a poke in the eye at the Democratic Party? Or perhaps the donkey hat is actually providing protection to its wearer – a ferocious Democrat chasing away the censorious? We’ve reported. You decide.

In contrast to the grey objects, the white sculptures are horizontal: they’re all rectangular dining tables, set with chairs of the type you’d find at a swanky fundraiser at a luxury hotel or that you’d rent for a fancy dinner party at your home. But these tabletops tell a darker tale.

One features a young male figure perched on top of the table holding what might be a severed head, with a detached pair of arms floating above him, its hands surrounding his eyes with the gesture that kids made when they’re trying to see something far away. We’re pretty sure he can see what’s in his hands – do the arms represent society forcing this person to see the destruction he’s wrought? Are they a benign presence urging him to seek a closer understanding of the world? Maybe. It might depend solely upon your mood.

Another displays a woman with long curly hair, seated close to the end of the table and wearing a cloak, looking down into her lap while holding an empty plate in one hand. A broken goblet is only inches away from her hand, and a small figurine shaped like a unicorn sits on the table beside her. A pair of disembodied arms hovers above the table, proffering a bowl and plate to no one in particular. At the table there are no other people, but several empty plates remain, propped up by tightly rolled napkins. Domestic discord of some type seems to have been on the menu, and she’s apparently been left to do the cleanup.

A third white table has nothing on it except a woman wearing high-heeled boots and a turban curled into the fetal position under a heavy blanket or temporary shelter of some type. A cat peers out from underneath it, coiled for action. Wine (or water) glasses rest near the woman’s head, and her arm is draped elegantly across her body. Rough night? Happy night? Good thing at least the cat is ready for whatever happens next.

To accommodate Rojas’ vision, many enhancements have been made to the infrastructure on the roof. The checkerboard tiles on the floor echo the cool white and grey of the sculptures. The dove grey color extends to the new pergola that frames the entrance to the installation – it also shelters a bar and a small dining area, where one can find cocktails named after precious metals and jewels (e.g., Ruby and Gold), and a nice selection of bubbly, wine and beer. There are also soft drinks, sandwiches and snacks on offer. These improvements will make for languid spring afternoons, and glorious summer evenings. We hope that they remain after this installation is gone.

If you want to have a look, many of the images from the installation are in the slideshow below. But if you like the element of surprise, you might want to see them for yourself first. It’s a good bet that you’ve never seen anything quite like this. You have until October 29th, so there’s plenty of time (too bad it will be gone before Halloween night).

My advice is to go up on the roof as I did: alone one morning, just as the museum opens so that there is hardly anyone there, ideally under a slate-grey sky. Lost in the ruins of a civilization – or perhaps the first stirrings of its rebirth – surrounded by the pulsing energy of Manhattan. That is a serious luxury experience that can be yours with just a bit of forward planning. Go, discover, ponder – and just beware: you might find yourself seeing these images again in your dreams.

0 comments on “What To Make of the New Art on the Roof at the Met?”