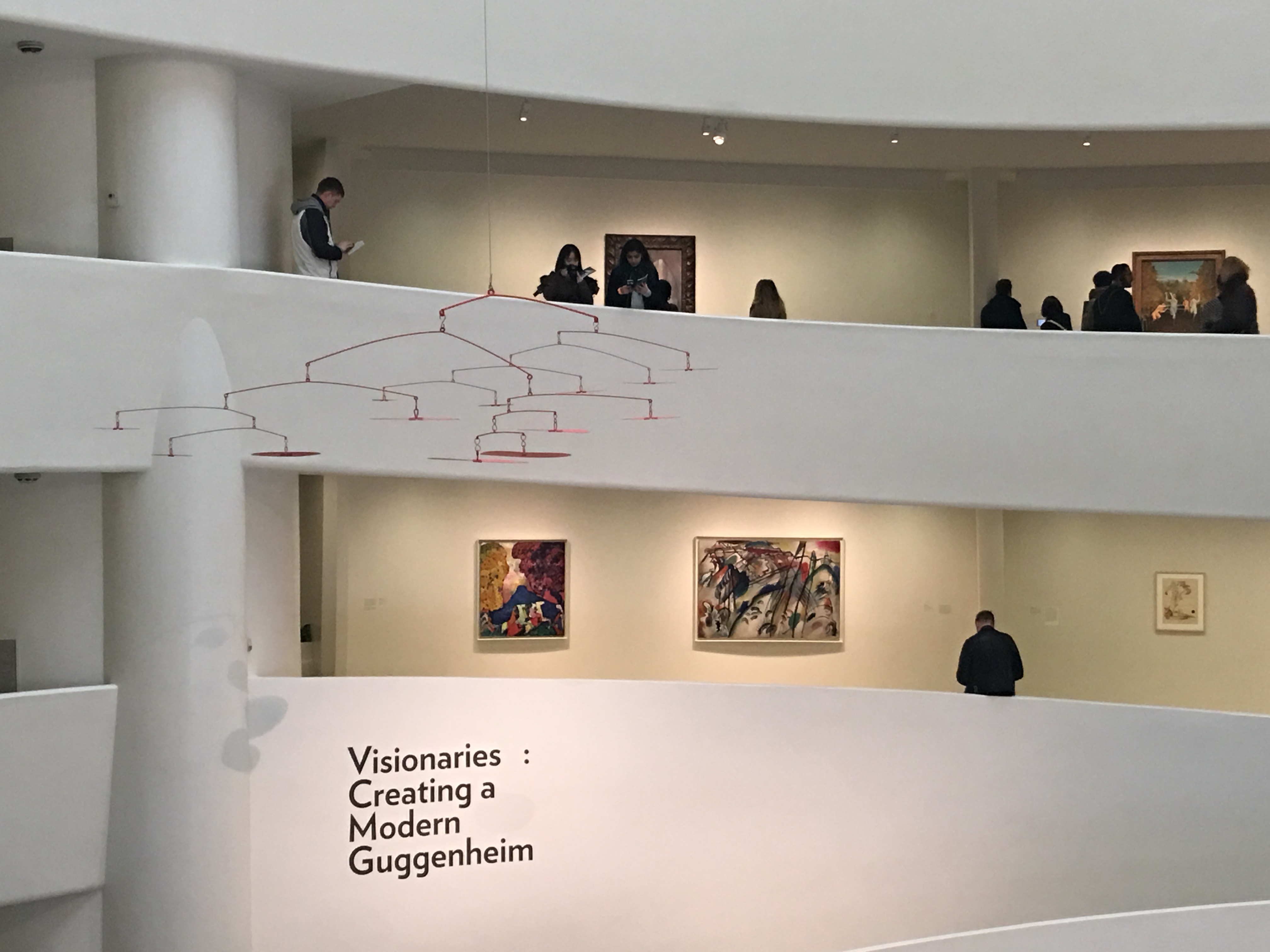 The contemporary art world moves at a dizzying pace, and every now and then it’s a luxury to slow down and reflect on one of the most important collections in the world. On the occasion of its 80th anniversary, the Guggenheim Museum in New York is doing just that with “Visionaries: Creating a Modern Guggenheim,” an exhibition of 170 works from its permanent collection, many of which are rarely on view.

On display from now until September, the institution has devoted its primary exhibition space to a comprehensive overview of the process of assembling the museum’s stellar permanent collection. Curated by Megan Fontanella with support from Ylinza Barotto, it includes paintings and sculpture, and spans works created from 1867 to 1947 (from Pissaro to Pollack).

It quickly becomes clear that the collection is the result of a collaborative effort between the Guggenheims, their advisers, and their co-collectors, many of whom made gifts or who sold important works to the institution. Working from the bottom of the iconic ramp to the top of the building, we take the journey that six visionary artists, collectors and dealers (three women and three men) took. The exhibit is a celebration of visions and dreams: those of both artist and patron.
The origin story behind the museum is remarkable. Solomon R. Guggenheim was an industrialist who had a deep love of Old Masters until in 1928 he met the German artist Hilla Rebay, who had been hired by his wife Irene Rothschild to paint his portrait. Rebay regaled him during their sittings with stories about a new kind of art being produced in Europe that was abstract and spiritual, called “non-objectivity.” A year later, at age 68, he began collecting new works under her tutelage – three years later, despite the great market crash of ‘29, he owned hundreds of them. In 1939 he established a museum on East 54th Street in New York City for the public to view his new collection, with Rebay as its director – their first exhibit was entitled “Art of Tomorrow.”

Twenty years later, the legendary current home of the museum was opened. Peggy Guggenheim, Solomon’s niece, had become instrumental in keeping the acquisition of relevant works on track (she was a triple threat – an art dealer, collector, and museum administrator – who was married to the artist Max Ernst and who discovered Jackson Pollack working as a janitor at the museum and made him a star). The trio of Guggenheim, his niece and Rebay – and their shared commitment to acquiring and showcasing works that reached toward a utopian future – shaped the permanent collection that we see today.

And what a spectacular venue in which to view it! You’ve surely seen Frank Lloyd Wright’s incredible building on Fifth Avenue in Manhattan, even if only in photos – it’s like no other museum in the world, and a fitting venue for this exhibit in particular, which at its heart is about how modernity and the future were viewed in the recent past. Rebay was the one who invited the architect to design the museum – she wrote that she needed “a fighter, a lover of space, an originator, a tester and a wise man.” The building Lloyd Wright created was envisioned by both the architect and his client as a cylindrical “temple of spirit.”

We’re in love with their creation, which opened to the public in the fall of 1959 – we still feel an electric current of excitement whenever we enter the rotunda of the Guggenheim, and we hope that feeling never fades. The swirling energy of the space feels as if it’s pulling you inexorably upward in a fantastical whirlwind. The curving ramp offers tantalizing glimpses of what’s to come, and the view looking downward is constantly changing as you ascend, which is also part of the fun. We used to visit all the time with our kids, one of whom now wants to be an architect, perhaps in part due to the allure of this space.

The Dandelion Chandelier Staff Photographer and I visited the exhibit recently, and here’s what we saw (you can see all of these and more in the slideshow at the end of this post). We were instructed by the museum staff to start at the bottom and work our way up, as the exhibit is chronological from start to end.

A red Calder mobile, entitled Red Lily Pads, commands pride of place at the start of the exhibition, and it remains a visual constant throughout. The first room up the ramp features several paintings by Russian-born Vasily Kandinsky, one of the first artists to attract Solomon Guggenheim’s investments, and the one whose work forms the core of the permanent collection. Shortly after, we see The Hermitage at Pontoise, a Pissaro that is the permanent collection’s earliest work (it was donated by Justin K. Thannhauser, an art dealer who specialized in early modern French paintings and after whom a wing of the museum is named; he was also the donor of works by Picasso and Seurat). Mountains at Saint-Remy, a snowy van Gogh, hangs beside Haere Mai, a sultry work from his best friend Gauguin. Both works are also from the Thannhauser Collection.

Another turn around the spiral leads us past a Duchamp, a trio of somber Picassos – circa 1909-12 – and Franz Marc’s last work, Stables, painted in 1913 before he died at Verdun during World War I.

At the exhibit’s mid-point, a docent excitedly explains the story behind Kandinsky’s Composition 8, which was purchased by Solomon Guggenheim at his first meeting with the artist in 1930 at the Dessau Bauhaus, the German art school where the painter was an instructor. His Composition series examines color and form and their psychological and spiritual effects – the artist stated that the circles in this work represent “the synthesis of the greatest oppositions . . . the concentric and the eccentric in a single form and in equilibrium.”

Another Composition, this one by Maria Helena Vieira da Silva, painted in 1936, follows. Unlike the Kandinsky, this one features no pure geometric forms, but rather bright red, blue and yellow shapes that evoke triangles, circles and rectangles; the lines are much softer, but still intertwined – a newer and more flexible view of the synthesis described by her predecessor. And to complete the tryptich of meditations on circles, around another bend the dome of the museum comes fully into view, with its latticework of metal forming an elegant circle atop the proceedings.

Beckoning us to keep climbing are iconic works by Brancusi, Chagall, Modigliani, Mondrian, Magritte, Miro, and Klee, many of which were from the estate of another art dealer who was Guggenheim’s contemporary, Karl Nierendorf. Others are from the estate of artist and curator Katherine S. Dreier. Our beloved city of Paris appears many times and in many forms, notably in Chagall’s Paris Through the Window and Delaunay’s Eiffel Tower.

The works we found ourselves lingering over as we continued our upward journey had a spirit of playfulness and irreverence: Paul Klee’s painting Dance You Monster to My Soft Song! reminded the Staff Photographer of Sponge Bob; Joan Miro’s Personage looked to me like a ghost and to my companion as a drop of water that had something important on its mind. As we neared the top of the spiral, schoolchildren circled around another Calder mobile, sketchbooks at the ready. At the apex, two dapper gentlemen engaged in a close examination of Jackson Pollack’s “Alchemy,” on view in New York for the first time in 50 years. It’s a fitting end to a splendid show.

A couple of practical notes: security is unusually tight at the museum, so you won’t be able to bring even a small backpack as you view the exhibit. Plan accordingly. The good news is that you can linger over this exhibit and make it a two-hour idyll – or you can dash in at your lunch break and see the entire show in under an hour. So you have no excuse for missing it!

Viewing any museum exhibit is both a solitary and collective experience. The overheard conversations, the movements of fellow visitors, and our own instincts and inclinations all inform how we see and interpret what’s before us. What a privilege to be in a great city in the presence of timeless, provocative art alongside an appreciative and well-informed audience. Solomon Guggenheim said of the opening of his museum: “I wished others to share my joy.” Thank you, Team Guggenheim, for sharing your treasures with the world. And thank you for reminding us that taking risks that appear to be crazy is how we discover brilliant things; that collaboration is how we scale them; and that even in the last chapter of our lives, we can start a new adventure, and perhaps even build what will be our greatest legacy.