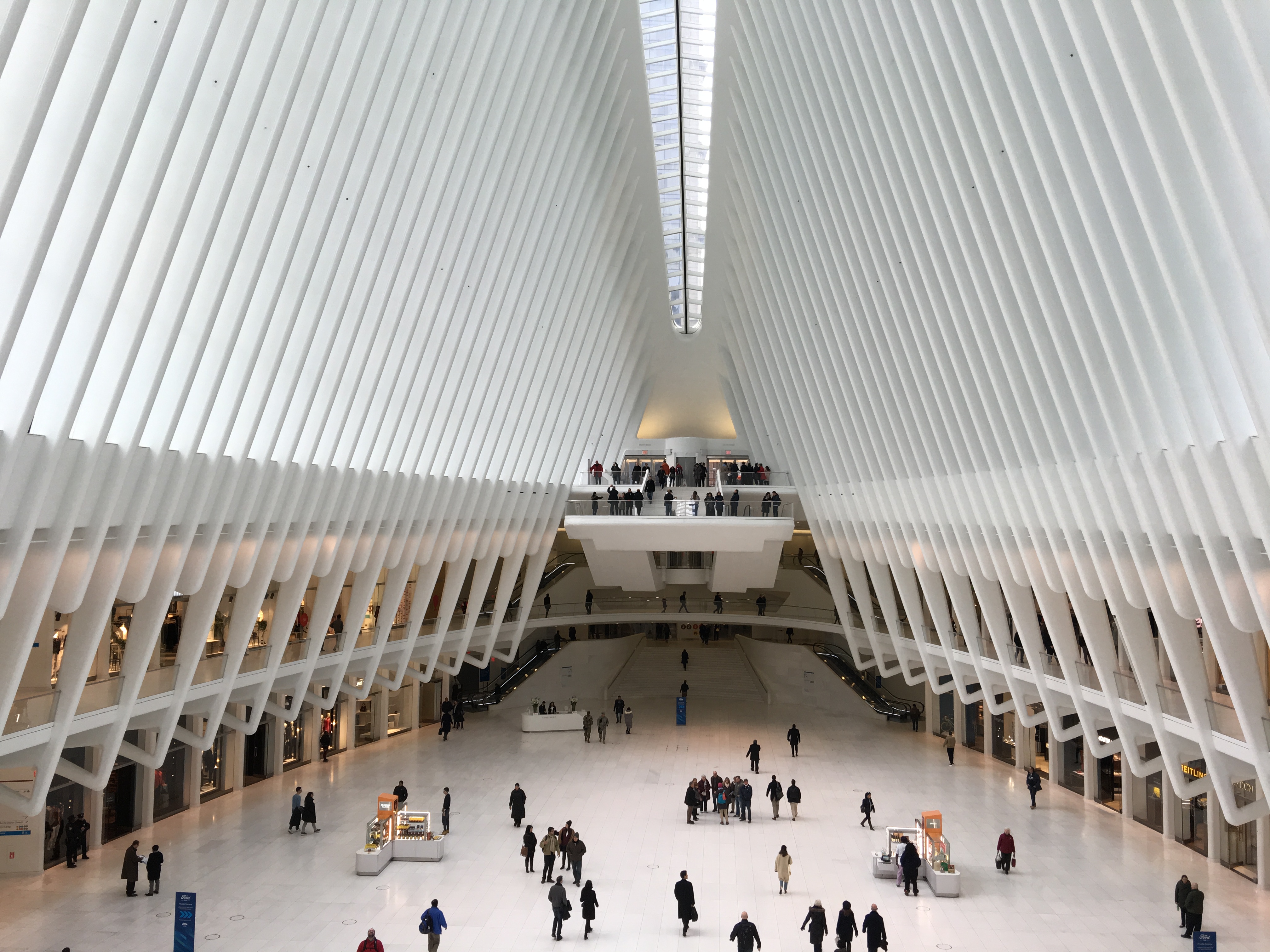 What does the luxury shopping experience of the future look like? It will be reasonably difficult to do better in terms of atmosphere than the recently-opened Westfield mall at the Oculus in Lower Manhattan.

The shopping complex opened last year – first with a soft launch, then with an official opening last fall. We wanted to give it some time to settle before venturing downtown to check it out (even now, many areas of the site are still under construction, both indoors and out). Yesterday, our Dandelion Chandelier Style Council decided to take a long-overdue field trip there – and deemed it absolutely worth the trip. If you haven’t seen it yet, you need to go now.

Officially known as the World Trade Center Transportation Hub, and designed by the architect Santiago Calatrava, the structure cost $4 billion to build (that was twice the original estimated cost, and the project was notoriously behind schedule, opening 7 years later than planned). It includes a shopping mall, a transit center and a pedestrian network to foster easy indoor travel among the various office buildings near Ground Zero. As controversial as it was during its creation, we have to say that we think it was worth the wait.

The structure housing the complex is astonishingly beautiful. From the outside, it resembles a great winged bird, its white pinions spread for takeoff. It sits in a little valley surrounded by an increasing number of towering glass skyscrapers, an incongruous nod to nature in the midst of a heavily-constructed environment.

Inside, the Oculus resembles a modern cathedral – the cavernous space immediately lifts the eye upward to the narrow slice of sky visible through the ceiling. If it were empty, it would undoubtedly feel spiritual. But it’s as busy as Grand Central Station, even mid-morning, with pedestrians crisscrossing the space in waves (good thing the space absorbs sound very effectively). The color palette is pristine white and brushed silver, and the ribs of the building are reminiscent of the external grid-work of the old Trade Towers, as well as the inside of a whale (Jonah and Pinocchio inevitably come to mind). Balconies protrude at both ends of the main atrium. Being inside it feels both sheltering and uplifting, and in that way makes the return to this part of the city a bit easier emotionally for those with vivid memories of 9/11.

The retail part of the complex is now largely occupied. The stores don’t strictly qualify as luxury, which is important to know before you head down. There’s a Dior, but its cosmetics only. John Varvatos, Apple, Penhaligon’s, Kate Spade, and Sugarfina are all there – with reasonably small stores – and speaker brand Sennheiser has constructed an eye-catching space in the middle of the atrium that reflects both the color and curves of the building’s exterior. While nearly all of the stores are from national chain retailers, there are a handful that are truly local: a wine shop and a French tea shop recently opened their doors, and there seem to be several more food options on the way. We didn’t find anything to buy this trip, but as more restaurants open, we’re sure we’ll come back.

We hope you’ll check out our slide show. And next time you have a spare hour, take a trip downtown and see it for yourself.

0 comments on “See The Oculus: A Breathtaking New Luxury Mall”