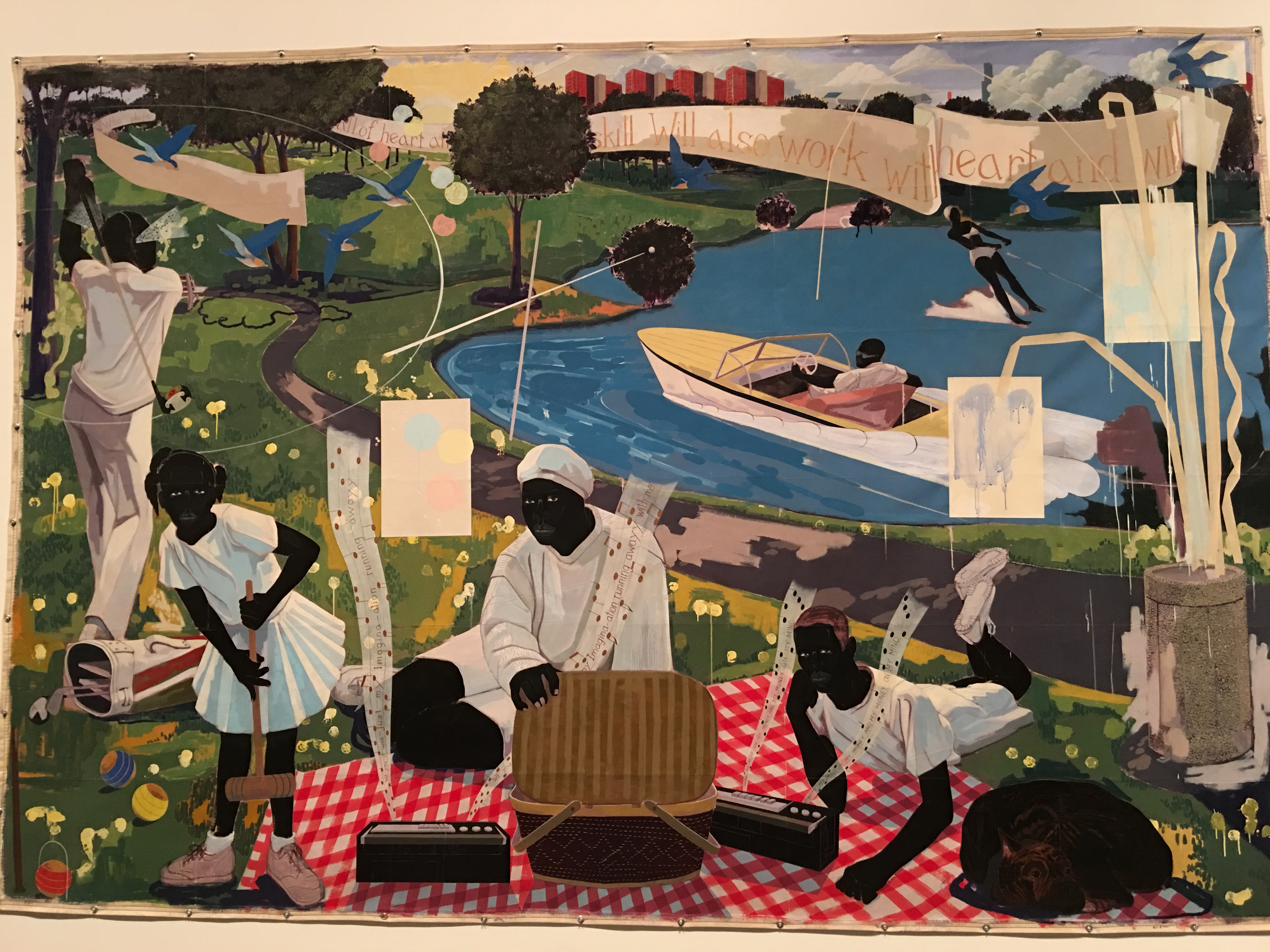 You know how sometimes practically everyone you know tells you that you “have” to see something (or do something), and at some point you become convinced that whatever the “thing” is, it’s got to be totally over-hyped and bound to disappoint?

For me, for the past few weeks, the Kerry James Marshall: Mastry retrospective at the Met Breuer has been that “thing.” My friend the contemporary art expert deemed it a “must see.” So did the New York Times. My best cultural advisor, my hairdresser, insisted that I absolutely needed to see it.

So this week, I did. And I’ll say it right up front: they were all right, and I was wrong (and stupid) to drag my feet. This is one of those exhibits that could permanently change your eye and the way you look at a painting, especially if you have ever considered yourself to be an outsider.

If you’ve been under a rock (or in bed with the covers over your head), you may not have heard the background on this exhibit. Quick overview: Kerry James Marshall is an African-American painter, born in Birmingham, Alabama in 1955 and now living in Chicago. Race and the perceptions of black people are the thread that runs through his work: he creates images that are iconic, tender, strong, startling, and vibrant – some abstract, some portraits, some landscapes – and in each, the African-American is central. His aim is to place black people in the center of the frame, and to place black artists in the center of galleries filled with “important” art.

Marshall’s range of work is truly impressive: in their color palette, composition and subject matter, this could easily be the oeuvre of three artists, or more. The Met Breuer’s exhibit is mounted over two floors of the museum, and viewing it is a remarkably rich experience.

I had seen one iconic image from the exhibit in many press reports: “Portrait of The Artist as a Shadow of His Former Self.” Inspired by “Invisible Man,” Ralph Ellison’s ground-breaking novel of what it means to be black in America, the black man – in a suit and hat – and the background behind him are largely shrouded in darkness. The only thing visible is the man’s eyes, teeth and white shirt. His wide smile could actually be a grimace. It’s a rather small piece, and a deeply sad statement about the primal desire to be seen and understood. Somehow I thought that the entire exhibit was going to be variations on this same theme, and I just didn’t feel ready to take that particular journey, given how the assault of the morning headlines every day is already a dark road to travel.

But this exhibit is quite the opposite: the paintings continue in this vein in the first gallery, but after that, Marshall’s color palette and range of expression blooms into a gorgeous series of paintings – some saturated with color, some muted, some celestial and some deeply grounded, and all inviting the viewer into an intimate space with the subjects. A few are abstract, but the preponderance of the works involve people, making this an accessible exhibit that can speak to anyone who is willing to engage. Everyone portrayed is black, and the mood captures the full range of human experience: despair, triumph, hope, romantic love, family, and public activism.

There are so many riveting works that it’s hard to choose a favorite. The “Garden Project” series is a poignant collection of five large paintings of housing projects in Chicago and LA that all have the word “garden” in their names. The juxtaposition of that genteel, refined word and the reality of what these places were actually like, and the way in which the artist creates images that are both lovely and fierce, will leave an indelible impression on you. Many of his abstract works employ the red, black and green of the Pan-African flag in compelling and intellectually demanding ways. Red (If They Come in the Morning) is both a reference to Color Field painter Barnett Newman and a political statement – the phrase is taken from a letter written by James Baldwin to activist Angela Davis.

The series in the exhibit that registered most deeply with me, though, is “What Does An Artist Look Like?” In this series of portraits, Marshall portrays black men and women attired in the classical garb and pose of European artists, with palettes in hand, and in some cases wearing smocks or berets. The point? An artist can look like anyone. An artist can look like you.

As I looked at one of the Garden Project paintings, two black men – one older, one younger – standing slightly behind me exchanged stories about why they were at the museum that day (it seemed that they had only just met). One said, “I’ve been here since the museum opened, and I don’t want to leave.” The other said, “I am so ashamed that I had never heard of this man before. I told myself, ‘I am not missing this.’” They smiled with pride and joy, and I couldn’t help thinking about how happy the artist would have been to hear their conversation.

The exhibit closes on Sunday, January 29th, so if you’re in New York this weekend, it is absolutely worth changing your plans to go and see it (just go early, because the lines will be long by mid-day). If you miss it, we’ve added a short slide show to give you a glimpse of the works that Kerry James Marshall has created. The exhibition catalog is sold out, and is on back order. More copies will be available in mid-February.

How thrilling to think that his work is still unfolding. I cannot wait to see what he creates next.