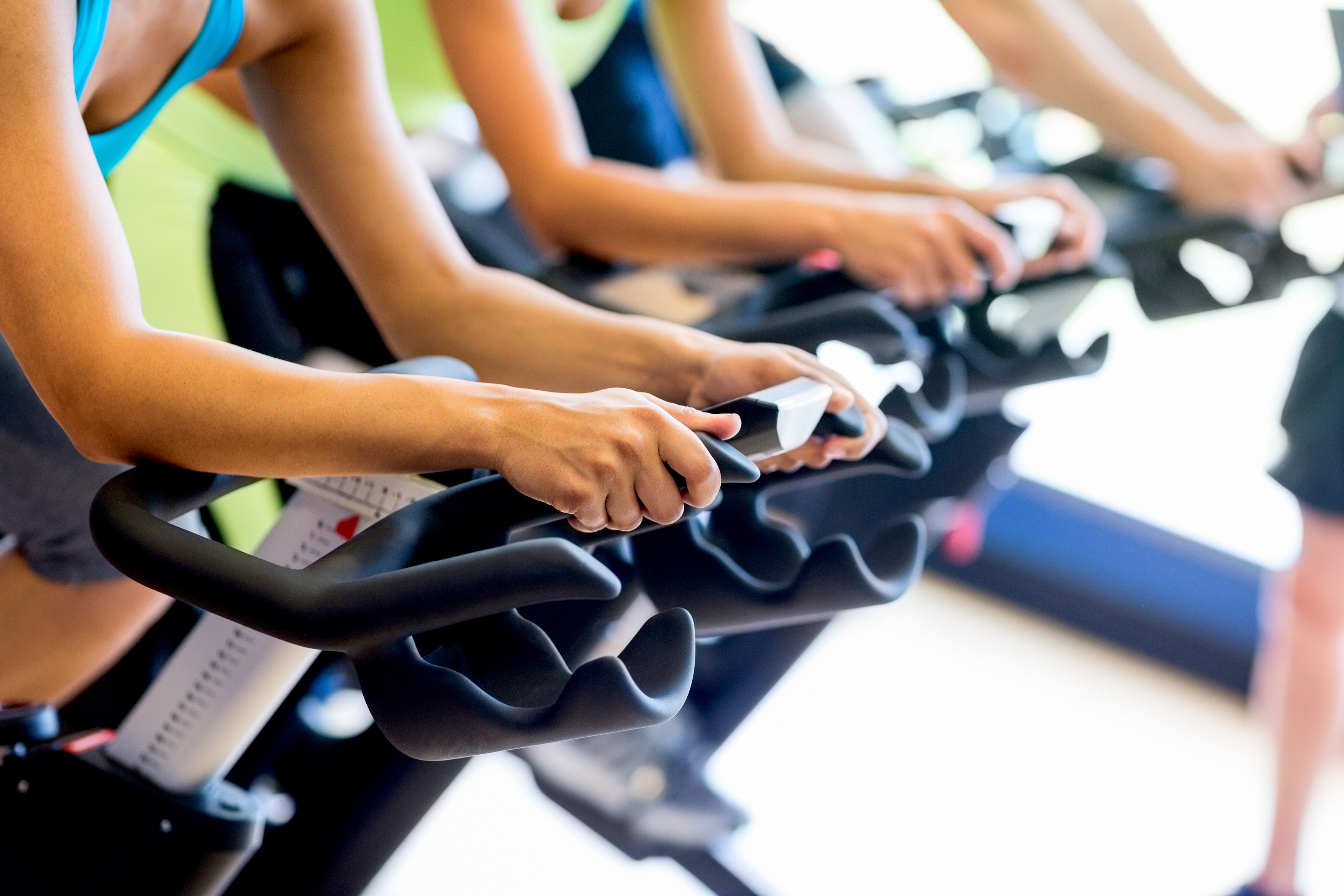 So many options for getting and staying in shape! In our ongoing quest to suss out how the world’s wealthiest people stay fit, our next stop is spinning. It’s a favored pastime of elites in major cities the world over, especially wealthy millennials – efficient cardio, inspiring trainers, cute clothes and excellent networking opportunities. What’s not to like? Even First Lady Michelle Obama is said to be a fan.

It all began in the late 1980s, when a fitness instructor called Johnny Goldberg (later shortened to Johnny G) debuted a workout program that could be done on a stationary bike, combining basic cycling movements, motivational coaching techniques, breathing awareness and heart rate training. He called it spinning, and the first classes were held in LA in 1989.

Fitness fads come and go (remember step classes? Nah, you’re probably too young). But spinning has endured and evolved – something about it clearly fulfills a deep need. According to Statista, in 2013 nearly 44 million people in America used an indoor stationary bike for exercise at least once last year, many of them in group spinning classes.

Elites in particular favor spinning studios over large fitness clubs: they’re more private and more intense workouts. Technology has made stationary bikes smarter in the past couple years – and VR has given spinning studios a particular boost as they can now serve up multimedia “rides” through exotic landscapes.

But it’s not just the elite who favor spinning and other specialized workouts (although they are fueling the trend): consulting firm Kurt Salomon reports that the US fitness industry was a $22 billion market in 2015, and that nearly all of the growth in the market came from spinning and boutique gyms. That year revenue was up 8.5% at specialized gyms, versus less than 2% at regular ones; membership grew 16% at boutiques versus only 1% at large gym chains. Spynergy Consulting tallied 525 dedicated spinning studios in North America in 2015 (compared to 7,000 yoga studios), most of them in greater New York and California – meaning there’s still plenty of room to grow.

So which spinning studios are the luxury crowd most excited about? Here’s what our research and our far-flung correspondents turned up (BTW, all of these studios treat class attendees like royalty, with concierge desks and excellent staff on site – the differences among them are about taste and temperament):

–Soul Cycle is still the gold standard for a luxury spinning class, with celebrity clients like Oprah and Kelly Ripa continuing to sing its praises. Founded in 2006 by Ruth Zuckerman, Julie Rice and Elizabeth Cutler, and now owned by the same company that owns luxury gym brand Equinox (Zuckerman departed years ago, and Rice and Cutler left the company in mid-2016), Soul has over 85 studios in the US (it’s long been rumored that a London studio is coming soon, but so far no). It’s become a lifestyle brand, selling chic workout gear and grapefruit-scented candles. Every Monday at noon, classes for the week open up and experienced spinners drop everything to get the instructors and classes they favor. Devotees describe it as life-changing, and while many celebrities have been spotted attended classes, some of the class leaders are also celebrities in their own right. It’s not inexpensive: a single class is $34 (plus $2 for water and $3 for rented bike shoes). For some, it’s addictive: people have reported regularly attending 10 classes a week. However, it can be polarizing, with lots of attendees and press reports either rhapsodically praising the workouts and communal vibe or being deeply critical of them. Which created a market opportunity for . . .

–Flywheel, Soul’s biggest competitor, which was founded by Ruth Zuckerman, one of the original founders of SoulCycle (yes, you heard that right). Priced similarly (but with free water and shoes!), Flywheel has almost 50 studios in the US; it differentiates from Soul by focusing on athleticism and personalization, including performance tracking via the “Torq board,” which displays resistance, cadence, and overall power output on the bike and on a leader board so the whole class can see (it also greets riders by name when they arrive). Flywheel instructors have dashboards indicating who is a new rider and may need extra coaching, and its app can suggest classes based on past experiences. The company launched auto-booking to make it easier to get the class you really want, in contrast to Soul’s 12-noon-Monday scramble. There’s less of a spiritual vibe, and more focus on holding oneself accountable for results. The privately-held company has global ambitions, with a Dubai location already open, and plans to enter Europe and Asia this year.

–Outdoor cycling is huge in London, and indoor cycling classes are starting to catch on, too. KX (pronounced “kicks”) is a posh private gym  that offers 20 spinning classes a week on Schwinn bikes. 1Rebel is a hip new full-service gym with highly popular spinning classes. Psycle is London’s best-known “pure play” spinning studio, with two locations – Oxford Circus and Canary Wharf. The focus is on the music, and classes range from 45 to 90 minutes.

–Dynamo Cycling is Paris’s first spinning studio. Located just east of the Opera Garnier, several of its coaches hail from the Paris Opera Ballet. In mid-2016 it was joined by Let’s Ride, founded by a former Flywheel and Peleton instructor. Based in the Oberkampf neighborhood (“the Williamsburg of Paris,”) the studio’s vibe is laid-back and entertaining, and its design is intended to appeal to art aficionados and collectors.

–Spinback Fitness in Shanghai, opened three years ago, utilizes uber-luxurious WattBike Pros (more on those here) in its studios. Class metrics are displayed on a “Performance IQ” board for cyclists to see in real time, and air purifiers ensure a high quality workout environment.

–XYZ Spin Studio, housed in a “covert cave” in Hong Kong’s New World Tower is also three years old. With 45 bikes, the branding is similar to SoulCycle: the studio promises a zen-like escape from daily life, with an emphasis on darkness, self-knowledge and beauty. It also seems to deliver a pretty good workout and a dance-party atmosphere, at least in the evening. The class names are whimsical (“Dream Awake,” “Grow Young”) and it will soon expand to a second location.

–Vicious Cycle at Bondi was the first spinning studio to hit Sydney. Since then, it’s been joined by Velofix, stocked exclusively with WattBikes; the popular Athlete Lab in the Central Business District; the stylish Pelotone (not to be confused with the US-based home spinning bike company Peloton); and the intense Turbo Studio.

There are many other options, especially in New York City. If you’re keen to experiment, check out Monster Cycle (a Goth vibe); JoyRide (live music); Cyc (live drumming and more space between the bikes); and Revolve (heavy emphasis on the music). If you’re a gamer, Equinox has a new spinning class called Pursuit that offers an interactive immersive gaming element.

Of course, if you can’t get into a class, or don’t have time for the trip to the studio, or just prefer to sweat without an audience, you can experience many of the benefits of a group class at home. Fast-growing US-based Peloton is giving these “retail” spinning studios a run for their money by streaming classes 24/7; not surprisingly, SoulCycle is now planning to launch a similar offering.

All that competition means there’s no excuse, people: either at home or away, there’s an exercise bike with your name on it.

1 comment on “Luxury Fitness: The Best Spinning Studios in the World”