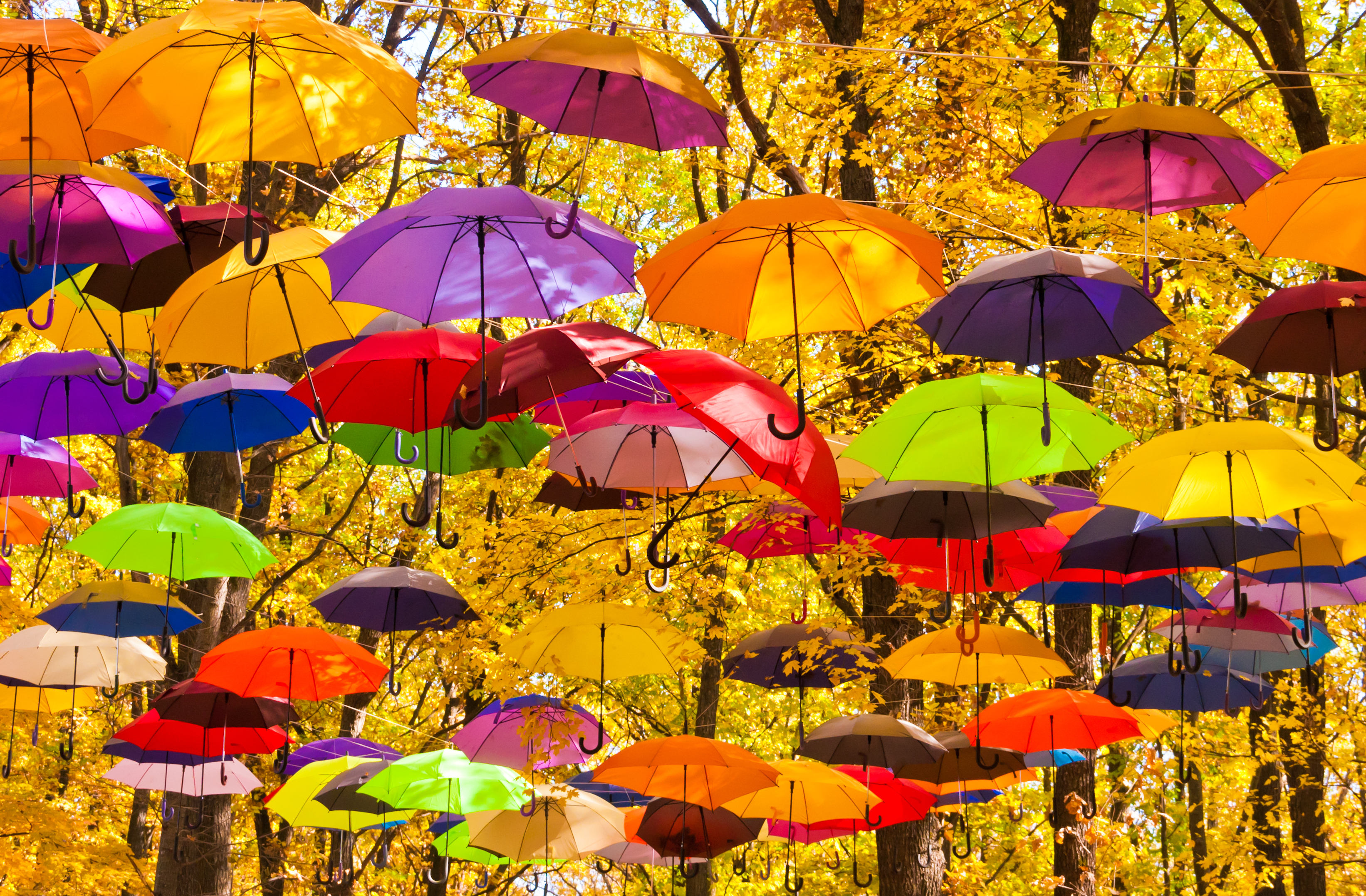 It’s been pouring rain in New York for the past two days, so after a blissfully long stretch of dry weather, I have become intimately acquainted, once again, with my umbrella. It is neither “smart” nor smart – it’s a small black drugstore special, and it doesn’t add as much as it ideally should to either my look or to my level of dryness in the rain (thankfully, my LV wellies can successfully carry a lot of that load).

When you think about it, there is a lot of room for innovation in the umbrella category. People have a lot of complaints about them, especially in cities where a lot of the population moves around on foot and has to navigate large pedestrian crowds. I have seen fist-fights break out over someone poking a passer-by in the face with the tip of their umbrella. I’ve seen people showered with water because they had the misfortune of standing next to an uncaring person who closes their enormous wet umbrella with a shake before entering a building. I’ve had umbrellas stolen from restaurant cloakrooms, I’ve left them in cabs, and also at other people’s houses. Sometimes I really need one but don’t have one because the weather forecast was wrong (or because I didn’t check it that morning). When it’s windy, they turn inside out. They can be devilishly hard to open (especially when they’re wet). A friend has sworn off of them altogether, claiming it’s too much hassle and it’s easier to just get wet (that could very well be another of those traditional guy things, as very few chic people I know could even form that thought, let alone verbalize it. Just get wet? You must be kidding).

A brief word on nomenclature and history before we proceed: an umbrella keeps you dry in the rain. A parasol protects you from the sun. The first known reference to an umbrella dates to ancient China. The concept seems to have originated there (the Chinese character for umbrella is a pictograph that resembles a modern umbrella), or possibly in India – in any case, it migrated to the West via the Silk Road. For the first thousand years, both umbrellas and parasols were a luxury reserved for the wealthy. Think about this the next time you curse yours because it won’t open properly – at least it beats a cloak, a newspaper or a trash bag.

I’ve decided that it’s high time for an umbrella upgrade for me, and perhaps for all of us. The good news? There’s a lot of new technology being deployed in the umbrella category. The bad news? Most “smart” umbrellas don’t leave you looking smart.

Take, for example, the Jonas – billed as the world’s first “smart” umbrella. Created by digital accessories company Fantastick, Jonas tells you the weather forecast for the current day as well as the next seven, and his LED lighting changes color depending on whether or not you need him that day. He sends an alert to your phone if you leave him somewhere. If you lose your phone, shaking Jonas will allow you to find it. That’s a lot of functionality, at a price tag of $105. The Kisha smart umbrella promises much of the same functionality. Oombrella is another offering in the smart umbrella category. Its core differentiation is that it’s community-based. So while like Jonas, it can send weather updates to your smartphone, if you lose your umbrella there is a user community – called Wezzoo – that will help you not just find it, but also retrieve it. The Oombrella claims to withstand high winds and heavy rain better than the average brolly, plus you become part of a social network of like-minded aficionados. French start-up Beau Nuage is running an Indiegogo campaign for the first umbrella to absorb water drops so that the umbrella always remains dry. As of this writing, they’re at 70% of their fundraising goal. Finally, there’s the multi-tasking Vodaphone Booster Brolly: it both charges your phone and boosts its signal. Perfect for those times when you’re way off the grid.

If “smart” to you means less about pure technology and more about high-performance, there are some interesting options in the market. The Senz umbrella (available at Bergdorf’s) was created by an industrial designer, and is virtually impossible to blow inside out. Apparently, two-thirds of the Dutch in Amsterdam carry this umbrella. The makers of the Cypress Umbrella also promise that it has been engineered so that it will never flip inside-out.

The catch? While Jonas is brainy, he’s not very good looking. Ditto the Oombrella. The Senz is unlovely, as is the Cypress. That may be OK for a lot of people. But the superficial and shallow among us – and I count myself in those ranks – want our rainy-day accoutrements to look sharp, not silly.

If you only care about looking smart, and not having your brolly be smart, you have a number of elegant options. Any flaneur knows that Hermes is the first stop on the hunt for a luxury umbrella. But there are others: Burberry has a sleek umbrella for $1,495 (buying a designer umbrella is a fine entry point into the brand and way to have a piece of the dream); the Atelier Umbrella from Visvim is made of natural rattan and goat leather, and sports an $8,000 price tag. The most expensive umbrella in the world appears to be a crocodile skin umbrella from Billionaire Couture, for $15,000.

A bespoke umbrella may ultimately give you the most luxurious experience. Not surprisingly, many of the legendary craftsmen for umbrellas reside in London. James Smith & Sons, Swaine Adeney Brigg (Prince Charles’ favorite), Lockwood, Pickett, and Fox Umbrellas are all fine choices. London Undercover is a luxury store specializing in high-end rain gear, and they are a great choice for a millennial in search of a brolly. The store is collaborating with Vans on a limited line of reworked Sk8-Hi Truk Cup LX shoes and coordinating umbrellas. If you prefer to roll Italian-style, Ombrelli Maglia Francesco in Milan has been hand-crafting umbrellas since 1854. Any of these will bestow instant gravitas.

Most custom and designer umbrellas are either logo-free or subtly branded. If you’re in the mood for showing off a bit, consider the world of umbrellas from exclusive luxury hotels. We’re not advocating that you filch the one in your room – you can buy them in the hotel gift shop. Rainy days could be much more cheerful under an umbrella from the George V, the Beverly Hills Hotel, or the Mandarin Oriental Hong Kong (a Bloomberg reporter raves about the brolly at the newly-reopened Watergate Hotel in DC). People might even stop you to chat if you’re carrying one. But you will probably be too busy wrestling with your inside-out umbrella to talk to them.

Therein lies the conundrum of the luxury umbrella world – you can have high style, or high performance, but not both. Clearly, we need an Apple, or Dyson, or Tesla equivalent in this category. We don’t want to sacrifice style for substance. We want both! Actually, what I really want is a chic umbrella with technology that would enable it to hover over my head without my having to touch it – an elegant hands-free model (not those beanie hats with little umbrellas on top of them) would be a game-changer. I would totally fund that on Kickstarter, if you inventors out there are listening.

Throughout the ages, it’s clear that people have actually formed emotional attachments to their umbrellas. Otherwise, why would there be so many crazy-odd names for them? Bumbershoot, gamp, Hanway, brolly, parapluie. There’s even a National Umbrella Day, celebrated on February 10th in many countries around the world.

It may be because an umbrella, in addition to shielding you from the elements, can double as a club, a cane, even a makeshift sword to pretend-fence with your friends (awesome cure for boredom). It can be modified to become a weapon of assassination, or a means of additional protection (French President Nicolas Sarkozy was the first head of state to use a Kevlar-coated umbrella as part of his security measures). It can even become a form of political protest: the 2014 Hong Kong protests became known as “the Umbrella Revolution” because the protesters used them to defend against pepper spray and tear gas. Gentlemen of style have frequently made their umbrellas a key part of their signature look. John F. Kennedy’s gift to the groomsmen at his wedding to Jackie was a black Brooks Brothers umbrella. It’s clearly an item that can be far more than just functional: a great umbrella should also bring a sense of style, heritage, whimsy, and élan (think Gene Kelly, singing in the rain).

Let’s hope that someday soon there will be a smart “smart” umbrella. In the meantime, I’ll be under my smart (not “smart”) umbrella – and yes, I will be singing Rihanna’s iconic song, my rainy-day favorite, as I splash my way through the city.

0 comments on “Can A Luxury Umbrella Be Both “Smart” and Smart?”