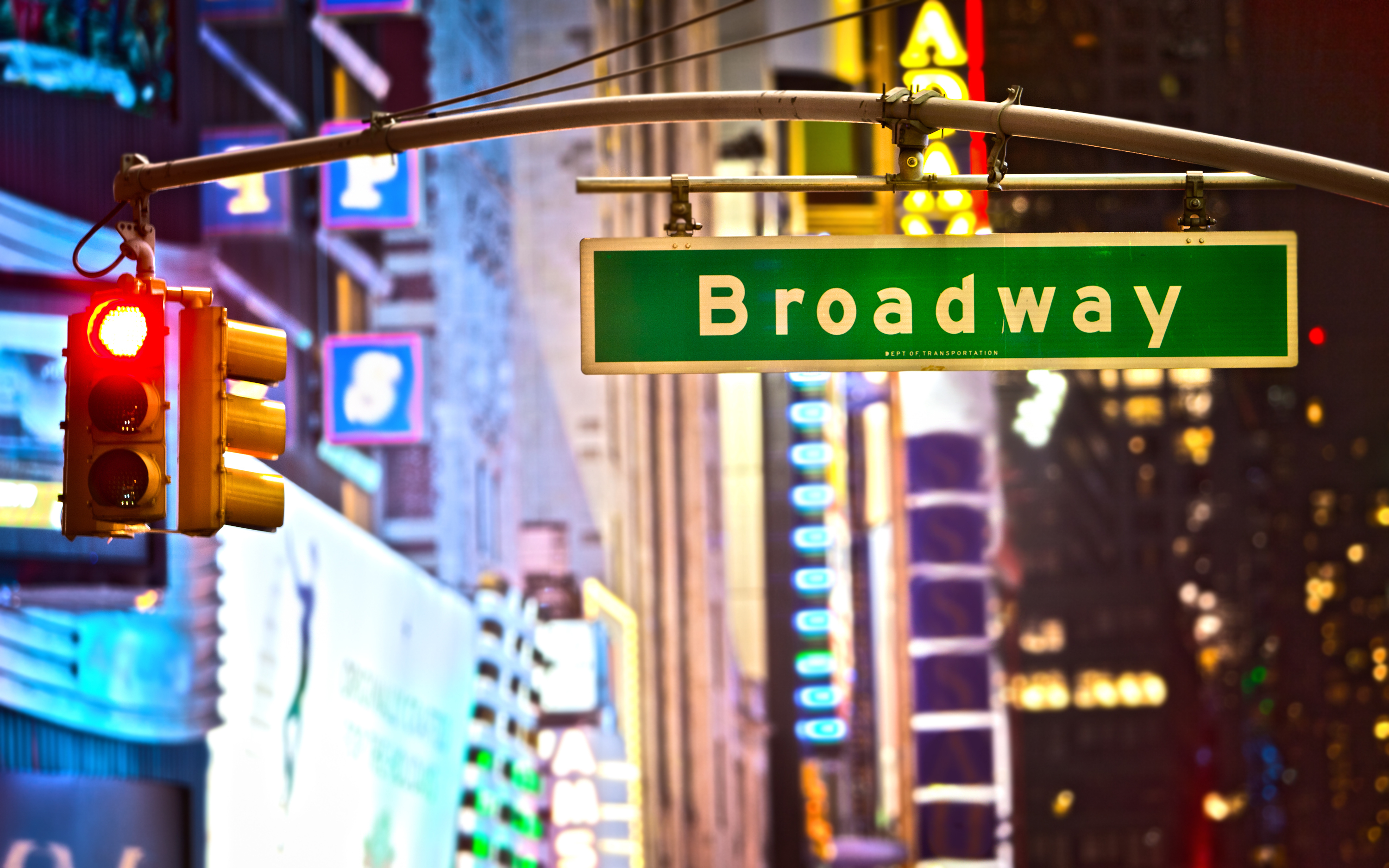 When a certain kind of person dreams of luxury, and of New York, they dream of Broadway: neon-lit marquees, gorgeous gilded theaters, thick red velvet curtains, the best singing and acting in the world, the electricity of live performance, the intelligence and engagement of the audience members, the cacophony of sound emanating from Times Square and Restaurant Row. When I was a kid in Detroit, Broadway was emblematic of my hopes for the future: bright, bold, and irresistible.

While Broadway’s origin story is a bit murky, it seems to be a case of exceptionalism right from the start. Apparently, when New York City planners decided to build the Manhattan grid, only Broadway was spared. The street was originally envisioned as a retail destination for the affluent. In 1883, the Metropolitan Opera House opened its doors at the corner of Broadway and West 39th Street (it has since obviously moved). Shortly thereafter, other theatres followed suit and created the foundation of the Theatre District we know today.

Last week, I had a particularly fun night out on the town with my husband – the kind that I could imagine only in my dreams growing up – at the annual black-tie American Theatre Wing (“the Wing”) Gala. Although it was the first time I’ve attended, this dinner is held every autumn in the grand ballroom at the Plaza Hotel. It was a fantastic “old New York” experience all around.

If you haven’t been to the Plaza Hotel lately, you should definitely stop by. I hadn’t been there in years, and I imagined it to be full of tourists and over-priced drinks. To my surprise, the new lobby and Palm Court by night are actually a pretty swanky reminder of the New York of long ago: glittering chandeliers, plush leather chairs, old-school cocktails and wise-cracking bartenders. It may not be hip, but if you’re in midtown, it’s still a pretty nice place to grab a drink pre- or post- your nocturnal main event for the night.

But on to the party! The Wing is the center of gravity on Broadway — they founded and govern the annual Tony Awards, and their immediate former board chair is 6-time Tony winner William Ivey Long, who is a costume designer extraordinaire (“Hairspray,” “The Producers,” and “Crazy for You,” among others). The new board chair is Tony-winning playwright David Henry Hwang (“M. Butterfly.”) If you love the theater, this gala is a must-attend. It’s one of the best I’ve been to (and I’ve logged a lot of hours at charity galas of all types).

American Theatre Wing CEO Heather Hitchens opened the evening with a witty speech that name-checked Eliot Spitzer, among others. Then the gospel choir from “The Color Purple” performed. Then dinner was served (lamb chops and kale salad).

This year’s honoree was Tony- and Emmy-Award-winning actress Cicely Tyson, and one of the things that makes this particular event so special is that the room is relatively small, and the luminaries are willing to be accessible to the attendees. So I got to talk to Cicely Tyson!!! She’s a regal presence, diminutive and full of grace, and it was touching to see her fans stopping by to pay homage. I also got to chat with Samuel L. Jackson (who is just as cool in person as he is on the screen) and his beautiful wife LaTanya Richardson Jackson (who is on the board of the Wing). Lucy Liu, Kathy Bates, Spike Lee, television executives Deborah Lee and Marva Smalls, realtor-to-the-stars Spencer Means, actress Danielle Brooks, Tony-winner Cynthia Erivo, designer Christian Siriano, and Reverend Calvin Butts were all there.

I was struck by how unusually eclectic and diverse the crowd was. No matter how you define diversity – race, age, sexual orientation, gender – this gala attracted an audience that was so much more representative of what New York really is than most of these kinds of events. The dinner was held the night of the first Presidential Debate, and it was almost hard to believe that both events were happening in the same universe, and not on parallel planes of existence.

As one might imagine, the fashion-watching alone actually made it worth the trip. I spotted gowns by Marchesa, Valentino, Monique Lhuillier, and Naeem Khan. One cool dude was wearing a Tom Ford tuxedo with black Prada leather sneakers. For the record, I was feeling moonlight and starlight – not neon lights – so I wore a midnight blue wool Dior dress shot through with silver and electric green sequins, a gunmetal gray Dior bag and navy suede high-heeled strappy Aquazurra shoes (so comfortable! You have to try these.)

Broadway is coming off of a record year for both ticket sales and attendance. According to the Wall Street Journal, the 2015-16 season grossed a record $1.37 billion, up 0.6% from the previous season. Attendance was up 1.6%, to 13.3 million. “Hamilton” was clearly a huge driver of this success, but “An American in Paris,” “The Humans,” “The Color Purple,” and “A View from the Bridge” were all draws, as well.

Curious to know what the in-crowd is looking forward to this season? Bette Midler in “Hello, Dolly;” Kevin Kline in “Present Laughter;” Mary-Louise Parker in “Heisenberg;” “Anastasia,” from the team behind “Ragtime;” and “Groundhog Day,” which is moving from London, where it’s getting rave reviews.

I know a couple of people who have produced multiple Broadway shows, and I’ve asked them if they do it for love or money. Not surprisingly, they say “both.” It’s well-known that investing in Broadway shows can be a crapshoot. As Bloomberg’s Ben Steverman notes:

Expensive musicals by famous pop stars can close within 17 weeks, as Sting’s $15 million musical “The Last Ship” did in January, while a Sesame Street parody with a small cast of singing puppets, “Avenue Q,” is still sending checks to its original investors 12 years after it opened, earning them an eightfold return.

He goes on further to note that it’s very difficult to track how many shows actually make money, or at the very least break even. He explains that “every production is a private company, generally as open about its finances as murderous Chicago chorus girls are about their crimes.” Occasionally when shows do make back their initial investment, producers will issue a press release to say as much.

On the bright side, my producer friends explain that it’s a hugely pleasurable feeling to bring a show to life, to help a writer or a director to fully realize their artistic vision, perhaps to crown a new star, and certainly to hang out with the cast and crew.

Plus there are so many great places to eat in the theater district, it’s a fine thing to have an excuse to visit some of them. I have a sweet spot in my heart for Barbetta, with its romantic garden. I also love the Redeye Grill, Del Frisco’s Steak House, and Osteria al Doge. An informal survey of favorite spots of my gala dinner companions resulted in these additional recommendations: Le Bernardin, The Modern, Aquavit, Hakkasan and Tulsi.

The first Broadway show I ever saw was “Annie.” (Yes, I guess that dates me as an old crone). The best one I ever saw? “All the Way” with Bryan Cranston. “Hamilton,” “The Glass Menagerie,” “Arcadia,” and “Company” are very close seconds. Shows I’ve never seen and really hope/need to? “Death of a Salesman” and “West Side Story.”

I think writing a great play, song or poem is exponentially more difficult than other genres of writing, so I am in permanent awe of the people who do it well. Ditto the performers who can do a show eight times a week and make every performance feel as if they’re doing it for the first time. A well-written play can change your mind. A well-performed play can potentially change your life. So be careful if you go to Broadway – it might have a lasting effect on you.

Manhattan is ever-changing. That’s part of why we love it. But sometimes, it’s also lovely to turn the clock back, and re-visit places that have endured the test of time. A great pre-theater meal, a sprint through Times Square, that electric moment when the curtain rises, gossiping and laughing over drinks and dessert afterward — it was surely fun in the 1950s. It’s still fun now.